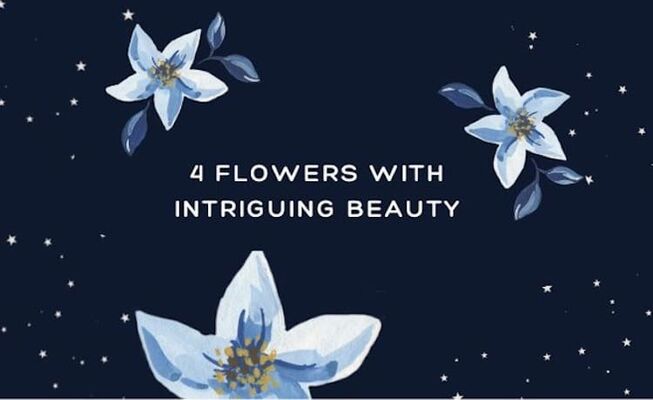 Flowers are undeniably one of the most beautiful gifts from Mother Earth. Despite the variety of size, shape, color and species of flowers, all of them possess a captivating beauty. Some flowers, though, stand out because of their unconventional appearance, strange growing or blooming habit, or mysterious good looks.

Here are four flowers that caught our interest and made us want to dig deeper. Read on to see what we’ve learned so far.

Scientifically known as Dendrophylax lindenii, the Ghost Orchid features white, odd-looking ghost-like flowers with a sweet nighttime scent. This leafless plant attaches itself to tree trunks using roots so it looks like it’s suspended in the air.  Considered epiphytic, the ghost orchid only uses its host for support. Its green photosynthetic roots have a symbiotic relationship with a type of fungus, to exchange sugar for nutrients for the plant to thrive.

A legendary flower with an unknown scientific name, the Youtan Polou or Udumbara is said to blossom only once in every 3000 years. This mystical flower is so tiny and hard to detect that you need a magnifying glass to see it. What makes it extra precious is that it has a pleasant scent that can fill a room even with its teeny-tiny size.

In Sanskrit, the name of this flower means “auspicious flower from heaven.” It is a blossom associated with Buddhism. Ancient scriptures reveal that the last time this flower was recorded was before Gautama Buddha’s birth.

Dubbed as the most expensive flower in the world, this blossom is priceless for it has never been bought. It is an elusive cactus plant that grows in Sri Lanka and in certain Indian and South American countries. This rare blossom has white to yellow petals, with a flower growing to up to 30 centimeters.  It takes about a year for this plant to bloom and once it does, it’s always at nighttime, starting at around 10pm until it reaches full bloom in about two hours, releasing a sweet fragrance in the process. Soon after the full bloom, the flower begins to fade and withers at daybreak.

Also known as the turquoise jade vine and emerald vine, the Jade Vine or Strongylodon macrobotrys is a woody tropical climber with flowers that appear luminous at twilight. Dangling clusters of claw-shaped blossoms in shimmering green-blue or aquamarine color suspend from twisting stems. Jade vine’s flowers’ color varies from luminescent blue-green to mint green - a hue rarely seen in the botanical world. When the blooms fall and dry out, they turn purple.